MRH was the UK’s leading independent forecourt operator, serving 2.5 million customers every week at 491 sites across the country. As a petrol station and convenience retail operator on the forecourts of several motorway services and a large number of A-road services, MRH’s partnerships with petrol companies BP, Shell and Esso sees them sell up to 2.5 billion litres of fuel annually. MRH also operates retail offerings that include Spar, Budgens, Subway, Costa and Greggs, as well as its own Hursts format.

MRH was acquired by Motor Fuel Group (MFG) at the end of February 2018 which now makes MFG the largest independent forecourt operator in the UK by number of sites and by volume of fuel.  MFG and MRH together operate more than 900 sites today. 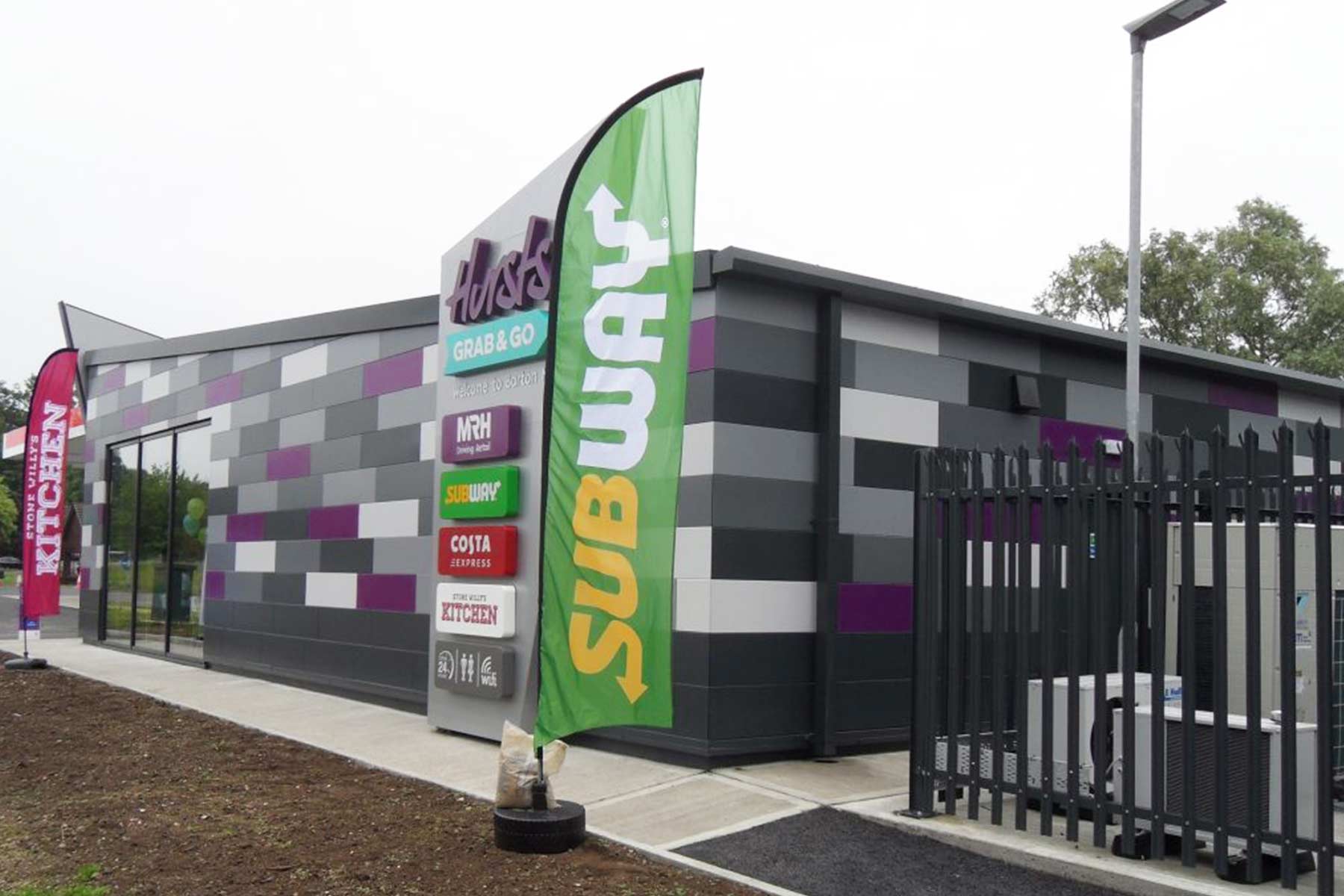 Repair and respray cladding that was damaged during ground works.

Prepare all scratches, dents and creases in cladding panels for filling.

To fill and apply primer to all affected areas.

Apply a bespoke topcoat in paint colour specified by the client

Painting of cladding panels only carried out to appropriate areas that have been prepared and primed and requested technique is spraying.

MRH Mildenhall service station on the A11 in Suffolk is no stranger to the importance of having an eye-catching building for attracting customers.

Having constructed a stunning new retail service station, Buckingham Coatings was proud to be involved in MRH Mildenhall’s project. Our expertise was required to implement some cladding panel repair work with respray to a number of damaged areas – all in line with MRH Mildenhall’s custom design. 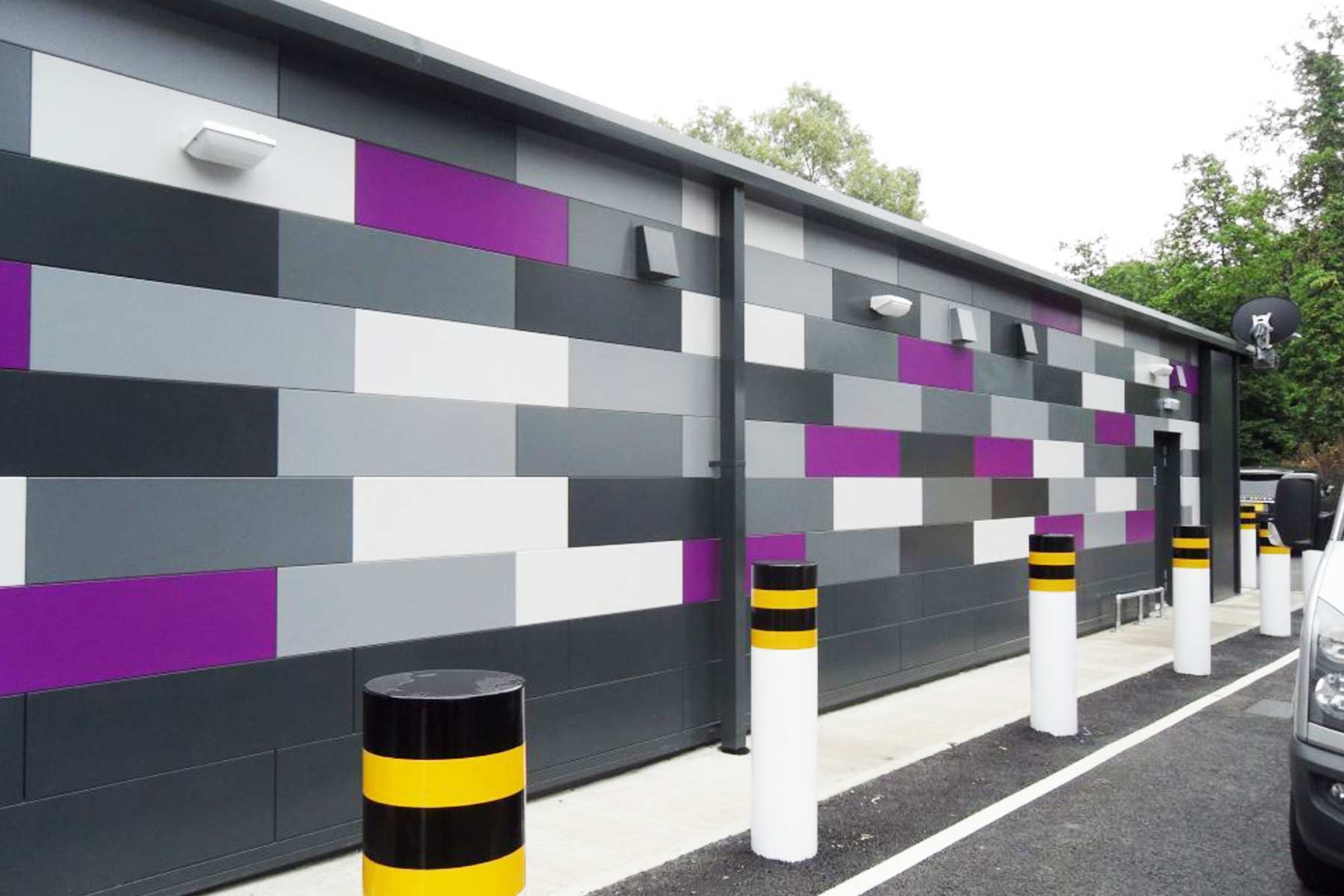 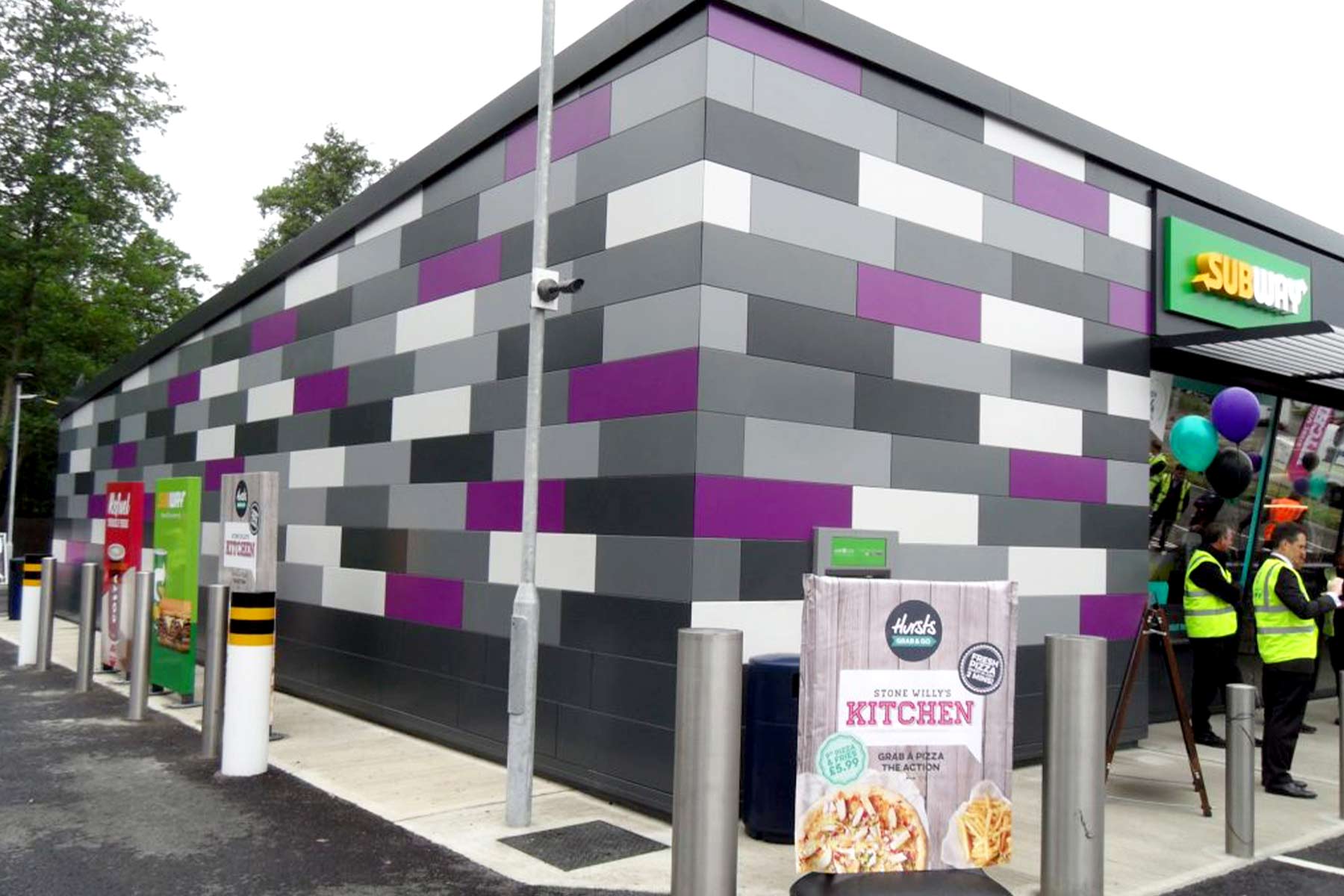 We worked closely with our client to ensure that all works were completed to the highest standard.

It was important to our client that the colour match was perfect as they had designed a bespoke pattern incorporating four different colours on the exterior of the building.

One of our dedicated colour technicians was involved in the project to ensure there were no compromises. Instead, we achieved an integrated brand-wide appearance that was fully in-keeping with the original aesthetic.

It was necessary for us to use a scaffold tower for certain elements of the cladding panel repair and respray works.

We were aware that extra care was necessary as some of the panels had been damaged previously through contact with a scaffold tower. However, we were able to guarantee full confidence in our operational expertise.  Our operatives are fully trained on the use of this equipment and hold Prefabricated Access Suppliers’ & Manufacturers’ Association (PASMA) tickets as evidence they are fully trained. 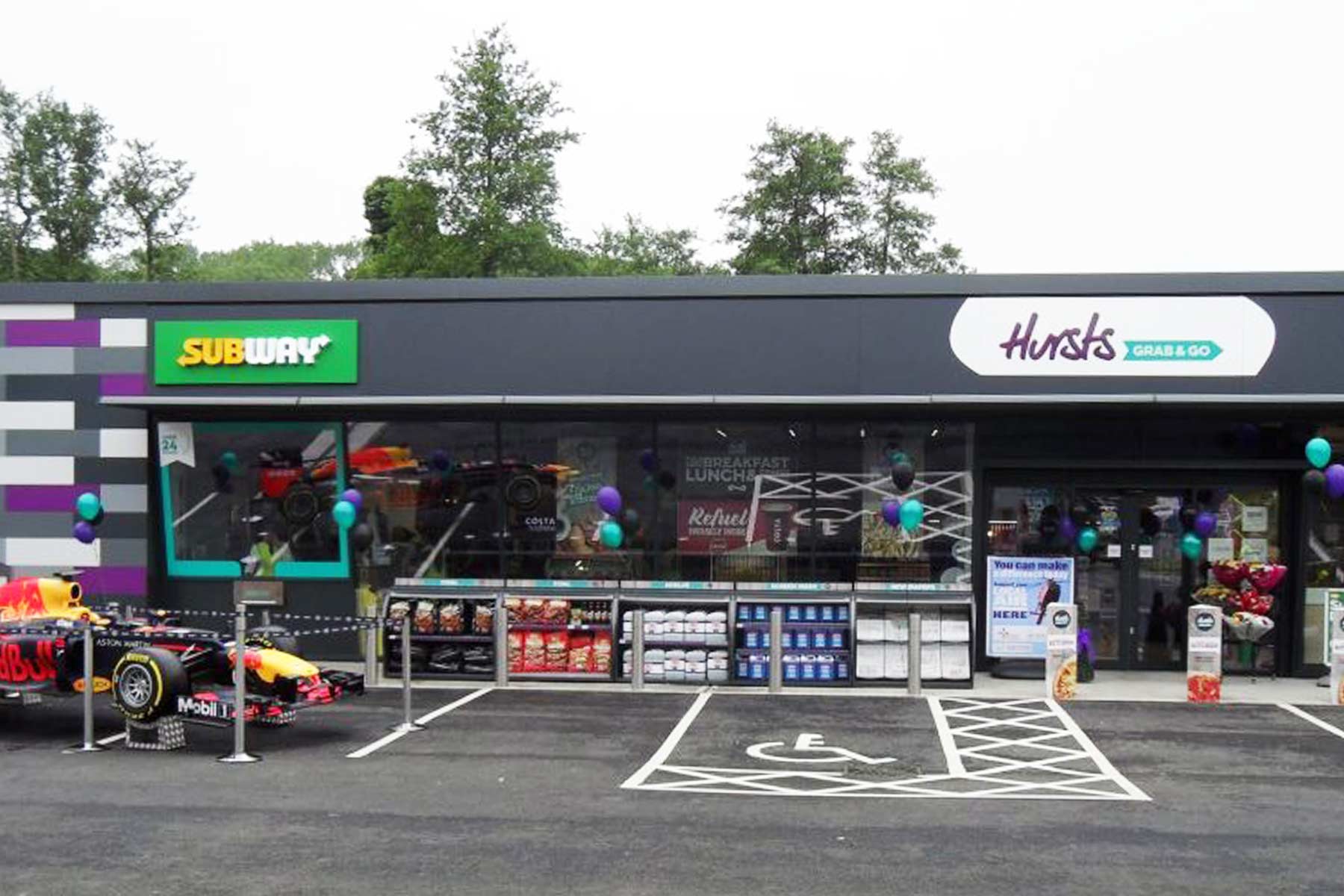 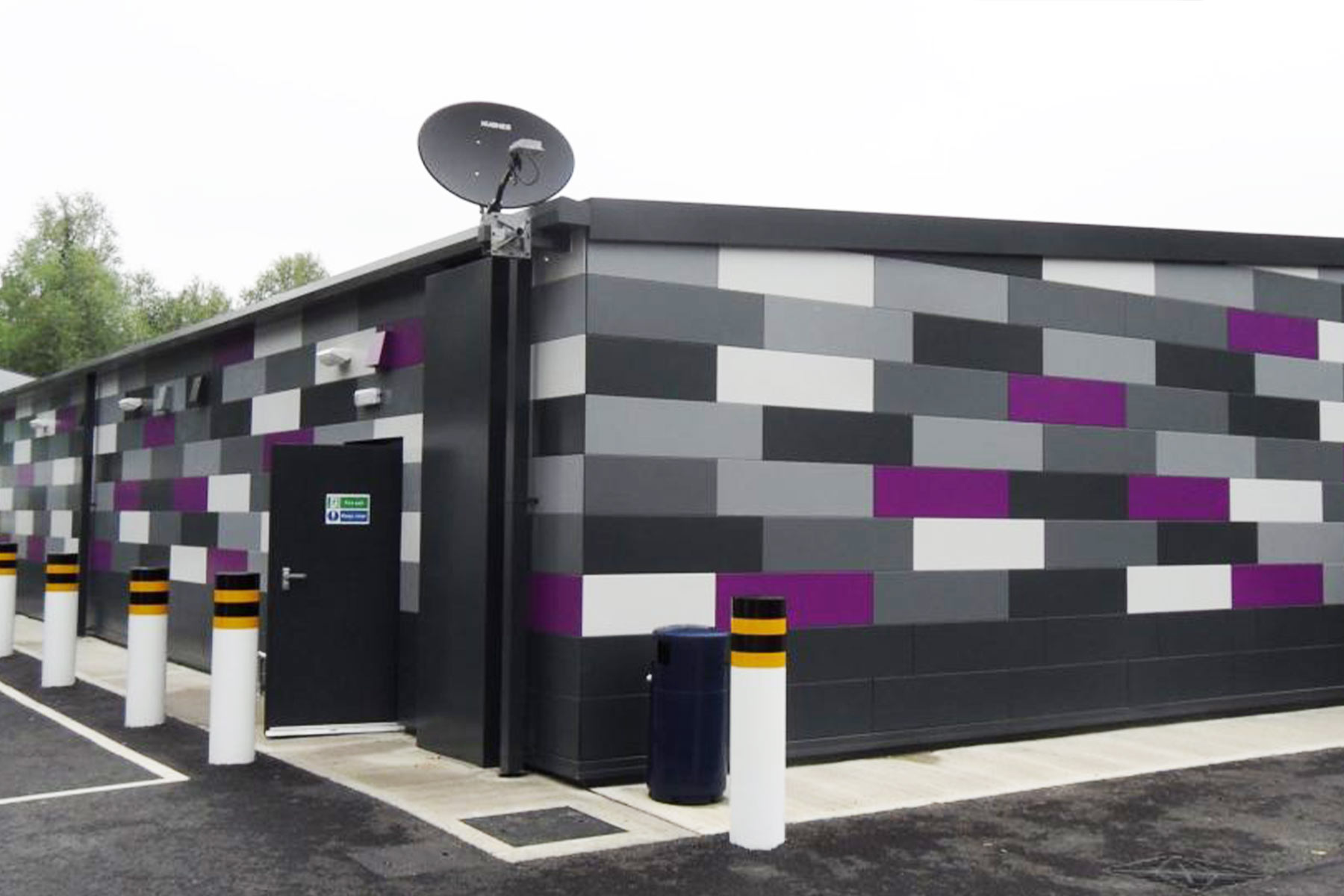 Cladding coating with protection from over-spray

Following completion of all of the panel repairs, our operatives protected areas from overspray around the cladding. This is always an important step but particular care was needed on this job to ensure we protected the client’s colourful cladding.

The service station was due to open to the public as part of a public launch which required the cladding works to be completed within a specific timeframe.

Buckingham Coatings delivered to spec and within the necessary timescale making our client extremely happy with the works carried out. 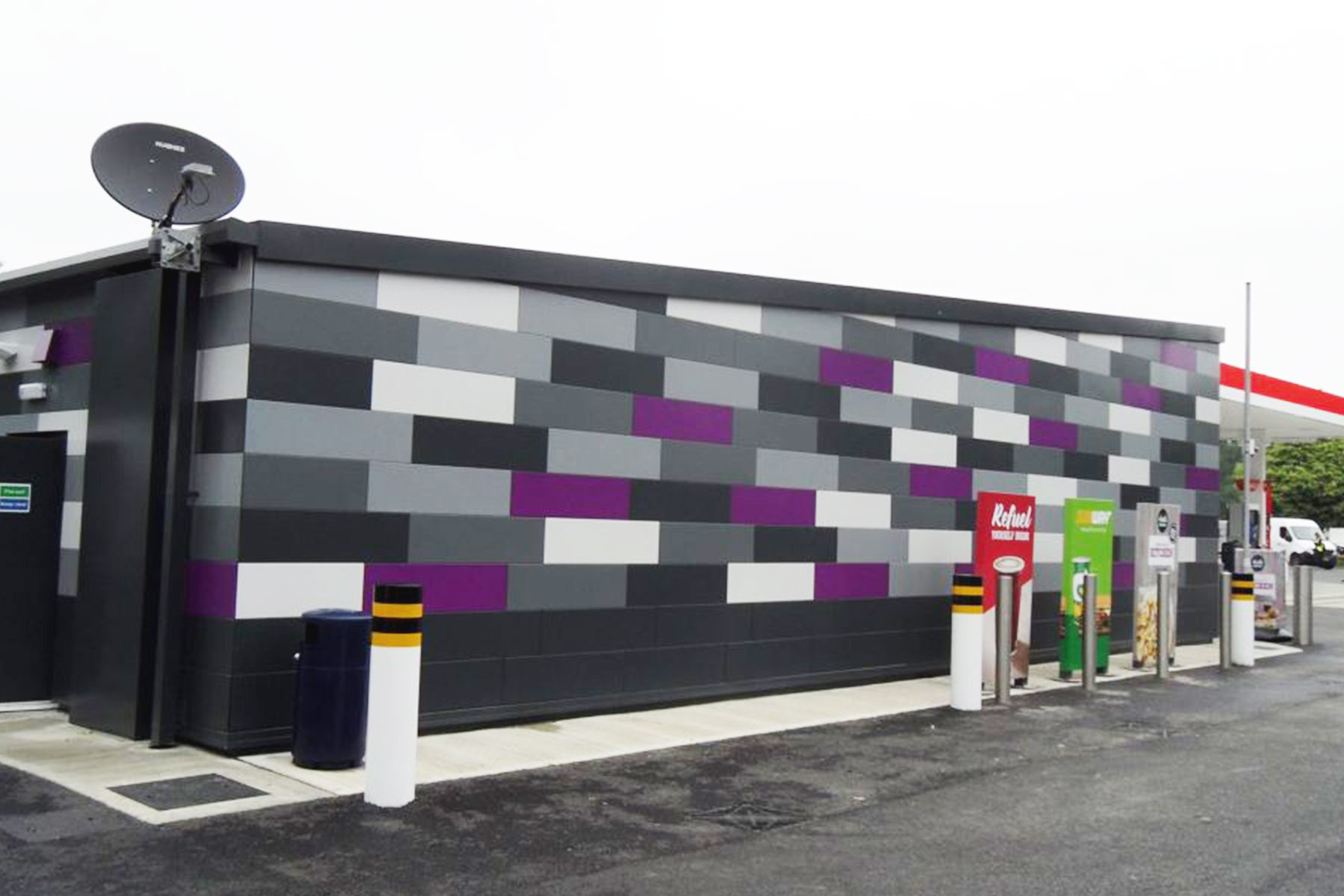 Contact us about improving your building’s cladding or signage

If you have any signage, cladding or facades that require cleaning, repairing or recoating then please contact us for information or a quote.

Check out some more of our most recent news:

12 Months Climate Positive What a way to start the year than celebrating being 12 months climate positive! Joining the ecologi team was one of the best things we decided

A Buckingham Year In Review

A Buckingham Year In Review Buckingham Coatings have completed many of things this year. We wanted to take the time to go through some of our biggest projects this year and

How Can Water Effect Cladding?

How Can Water Effect Cladding? Many people are not aware of the effects that water can cause on cladding, we want people to be made aware of this especially with the

Donating To The Food Bank To Support The Local Community

Interested in working with Buckingham Coatings on a project like the above? Get in touch today to discuss your requirements.